William Powers
Author and Sustainable Development Professional
Dispatches From the Sweet Life: One Family, Five Acres, and a Community’s Quest to Reinvent the World.

Powers has worked for two decades in development aid and conservation in Latin America, Africa, and North America. From 2002 to 2004 he managed the community components of a project in the Bolivian Amazon that won a 2003 prize for environmental innovation from Harvard’s John F. Kennedy School of Government. His essays and commentaries on global issues have appeared in the New York Times and the International Herald Tribune and on National Public Radio’s Fresh Air. Powers has worked at the World Bank and holds international relations degrees from Brown and Georgetown. A third-generation New Yorker, Powers has also spent two decades exploring the American culture of speed and its alternatives in some fifty countries around the world. He has covered the subject in his four books and written about it in the Washington Post and the Atlantic. Powers is a senior fellow at the World Policy Institute and an adjunct faculty member at New York University. 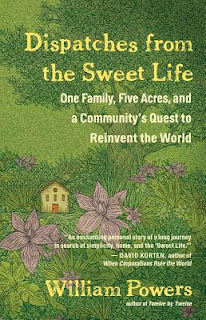 In his first book, Twelve by Twelve, Bill lived in an off-grid tiny house in rural North Carolina. In New Slow City, he and his wife, Melissa, inhabited a Manhattan micro-apartment in search of slow in the fastest city in the world. In Dispatches from the Sweet Life, the couple, with baby in tow, search for balance, humanity, and happiness in Suraqueta, Bolivia, a subtropical town where the Andes meets the Amazon. Surequeta is also a Transition Town — a model community that aims to increase self-sufficiency to reduce the potential effects of peak oil, climate destruction, and economic instability.

Leaving behind America’s work-and-spend treadmill, La Familia Powers embrace the potential of the Sweet Life (la Vida Dulce) — the Bolivian idea that happiness is best achieved in deep community in balance with nature.

Initially, the young family discovers a blossoming Transition Town with a miniscule carbon footprint, organic farms, community work parties, and a pace of life reflected in its denizens’ longevity and happiness. They build an adobe house beside a prolific orchard and weave their lives into a creative community of Bolivians and foreigners.

Joining the battle is a motley crew of permaculturists, bio-builders, artists, beer brewers, earnest university students, creative business people, and public officials who, against all odds, struggle to forge a Global South model of self-sufficiency and sustainable happiness.

Can one family overcome the obstacles to living a sustainable, happy life? Can a vulnerable town confront fast corporate globalization, defending a slow economy and community? Can the Bolivian nation, in the end, forge a workable alternative to inspire an endangered planet? No matter the outcome, Powers delivers a timely, inspirational, and thought-provoking personal exploration of what sustainable living can look like. 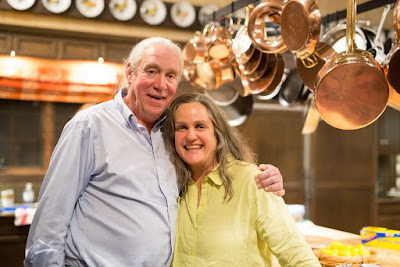 Wild Grill Foods was formed in 2010 to produce healthy seafood products including burgers, dogs and sausages. Their line of products feature sustainable fish all natural ingredients – a perfect fit to meet today’s demand for healthier lifestyles. All the products are made with reliable, sustainable natural protein sources such as wild caught Pacific Salmon, Pollock, and shrimp along with highest quality GMO free gourmet spices and ingredients. Additionally, Wild Grill offers Natural and Gluten Free products.

The founders of Wild Grill Foods, Patrick and Dagmar Sullivan, have been in the seafood business since 1997, making one of the first salmon burgers available in the retail market. Wild Grill Foods has capitalized on this knowledge by introducing for the first time nation-wide, a seafood sausage featuring a natural seaweed casing. This special casing allows the seafood sausages to be cooked right from frozen in just minutes. If you are looking for a more traditional hot dog, they have that too in the latest addition to the Wild Grill Foods product line - a smoked/cured salmon hot dog in a skinless casing. These new products, along with their outstanding fish burgers, fulfill the company’s pledge to today’s consumers—to provide high quality, healthy, sustainable seafood products that are nutritious, delicious, minimally processed & all natural. 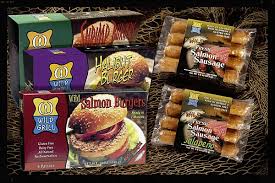 Posted by Epicure Traveler at 5:59 PM No comments: