Slow Living Radio was delighted to find the charming Jim O'Leary, Director of Design for Waterford Crystal, appearing and signing his marvellous crystal creations in downtown San Francisco.  Hear his inspirational story of starting with the company as a boy of 15, and how he progressed through the ranks over a span of 53 years, living the entire time in the quaint namesake town of Waterford, Ireland.  A truly "slow living story" indeed! 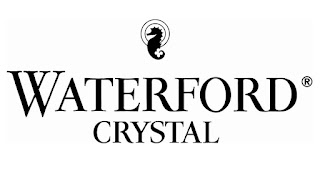 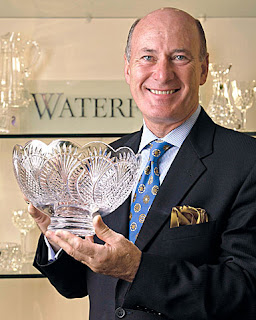 http://na.wwrd.com/ae/us/icat/waterford
As Director of Design for Waterford Crystal®, Jim O'Leary is the curator of a design tradition that stretches back to 1783.
Under his direction, Waterford has become known to the world as an enduring symbol of quality, tradition and modernity with timeless designs that add significance and beauty to the home. Jim has played a pivotal role throughout the decades with his artistic eye and inspired view of the world. He continually brings fresh perspective to the Waterford Design Studio in Ireland, always providing the brand with new interpretations of what it means to be modern today. Mr. O'Leary describes Waterford's enduring legacy and design leadership well. "It is only by being of its time that Waterford Crystal can aspire to be timeless. What endures is not a single look or style, but a way of putting ancient skills to new uses in order to create designs that move beyond mere fashion to achieve lasting style.
After beginning his career as a Waterford apprentice in 1960, Jim O'Leary quickly achieved Master Craftsman status by age 24. In 1980 he joined the ranks of the legendary design team and thus began his travels to the United States where he has charmed generations of collectors ever since. Among his most important designs are the Araglin, Carina and Castlemaine patterns; The Romance of Ireland collection; and the Star of Peace, which were the first Waterford Crystal panels to be placed on the famous Millenium Ball in Times Square in 1999.

﻿﻿﻿﻿﻿﻿Serving as Waterford Crystal's international brand ambassador, Jim spends an average of five months each year visiting consumers and collectors around the world. At the scores of events he attends, he puts his creativity to work on a more practical level by inscribing his signature on Waterford Crystal pieces with an electronic signing pen. Through his travels he gains valuable insights and inspiration from consumers which he then brings back to the designers and craftsmen on the Waterford Design team to develop and refine existing and new product lines. His understanding of the ever-changing market and consumer ensures Waterford Crystal remains the global leader in crystal design.

About Waterford Crystal
Waterford Crystal designs, manufactures and markets an extensive range of crystal stemware, barware and giftware for distribution throughout the world. In recent years, Waterford has built upon its reputation as a leading source of prestigious tabletop and gift products by expanding into several new businesses. Significant expansions into tabletop and gifts have occurred with the launch of the Marquis by Waterford, the addition of Waterford Fine China, Waterford Fine Flatware, and Waterford Holiday Heirlooms. Each of those initiatives reflects the company's commitment to creating prestigious products -- for gift giving, entertaining, and home decorating -- whose classic designs transcend time.

The company of Waterford was first established in 1783 on land adjacent to Merchants' Quay in the heart of the Irish harbor town of Waterford. Its founders were two brothers, William and George Penrose, who were important developers and principal exporters in the city. Their vision was to "create the finest quality crystal for drinking vessels and objects of beauty for the home." More than two hundred years later, the reputation they established for creating glass of unsurpassed beauty and quality has transcended the intervening centuries.
The beginnings of glass making in Ireland are lost in the mists of time but there is sufficient archaeological evidence to show that, from the early Iron Age, glass was regarded with respect. Indeed, medieval documents can prove glass making existed in Ireland back in the middle 13th century.
However, the Waterford Crystal story started to blossom in 1783 when two brothers, George and William Penrose, founded their crystal manufacturing business in the busy port of Waterford. They were important developers and the city's principal exporters. The development, they told the Irish Parliament, cost £10,000 - a great deal of money in the 18th century. 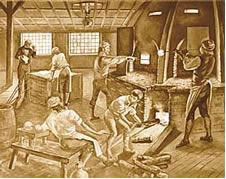 They employed 50 to 70 people, led by a fellow Quaker, John Hill, from Stourbridge in England, and succeeded in producing crystal with a purity of colour unmatched in Ireland or England. Merchant ships sailed regularly from the port of Waterford with cargoes of crystal bound for Spain, the West Indies, New York, New England and Newfoundland.
Another century passed before the enterprise was revived. In 1947, while Europe was still in ruins after the second World War, a small glass factory was set up in Waterford just 11/2 miles from the site of the original glass factory.
Waterford Crystal today has very strong links with its illustrious predecessor. There is today the same dedication to the purity of color, to the same design inspiration and to the same pursuit of highest quality levels possible. The traditional cutting patterns made famous by the artisans of Waterford became the design basis for the growing product range of the new company.
Products which have extended the power of the Waterford brand beyond its core crystal products include Waterford China, Waterford Table & Bed Linens, Waterford Stainless Flatware and Silver Gifts, Waterford Writing Instruments, Waterford Holiday Heirlooms and Waterford Crystal Jewellery.


Waterford Crystal, today, is the leading brand of premium crystal. Its products - superb handcrafted crystal stemware, giftware and lightingware - are designed and manufactured to the highest standards.
The brand's reputation among its target market - upscale men and women - in its major markets is such that it has taken the brand to the heights that it now occupies. The target consumers simply regard Waterford Crystal as the best for self and gift purchase.
Recent research has confirmed the standing of Waterford Crystal in both the US and the UK.
In November 2000, Waterford Crystal was named as the top world class brand in the United States by a survey conducted among 30,000 people by the Princeton, New Jersey, based independent market research company, Total Research Corporation. Total Research said that Waterford Crystal was judged by American consumers as the brand with the highest quality out of 19 world class brands in the US market. Other brands in the league table below Waterford include Rolls-Royce Bentley, Bose stereo and speaker systems, Philadelphia cream cheese, Harley-Davidson motorcycles, Kodak, Heinz ketchup and National Geographic magazine.
In 2002, Waterford celebrated the 50th anniversary of the introduction of the Lismore pattern of crystal. Almost every year since its inception, Lismore has topped the popularity list and has been the biggest selling pattern of crystal in the US and the world. But there are others among the repertoire of Ireland's most famous export that have gained their own following - Alana, Carina, Araglin.
Waterford Crystal has become almost a synonym for the finest quality crystal sought after by collectors and connoisseurs around the world. Each piece of Waterford is watermarked with the word "Waterford", a signature indicating the name of the finest crystal in the world.
Posted by Epicure Traveler at 4:20 PM 1 comment: