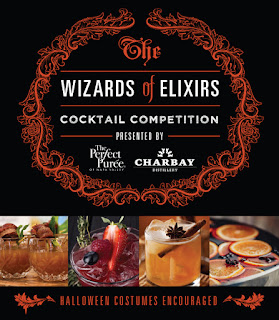 WHO: The Perfect Purée of Napa Valley, Charbay Distillery, & COPIA host their first annual Wizards of Elixirs Cocktail Competition to benefit families affected by the fires in Napa, Sonoma, Mendocino and Lake Counties. Originally slated for the Napa Valley High School Boosters program, in light of the current needs of those devastated by the fires, the Boosters are hoping that attendees will give far and large.

WHAT: The Wizards of Elixirs, a friendly cocktail competition fashioned in walk-around style at the Culinary Institute of America’s Copia location in Napa, The Wizards of Elixirs invites guests to sample cocktails by 13 of Wine Country’s top bartenders as they vie for the People’s Choice Award and apps prepared by the CIA. After The Wizard of Elixir is crowned, stay for a Halloween costume dance party from 8-11 p.m. Costumes are encouraged but not required.  Light bites provided by the CIA.

TICKETS: $35 at www.perfectpuree.com/wizards/ or $40 at the door. Tickets include cocktail tasting, light snacks and one raffle ticket. Additional raffle tickets will be available to purchase. Ticket and raffle ticket proceeds will benefit numerous families affected by the devastating fires. Must be 21 to attend with ID required for admission.

Born in California, Marko Karakasevic grew up around pumps, hoses and tanks. This was his father's world and the family always lived close to the winery where Miles, his father, made wine. Marko graduated from St. Helena High School and spent a year at Davis where he began his studies in sports physical therapy. However, harvests would find Marko working in various Napa Valley wineries.

After working in a Napa Valley tasting room, he discovered he liked all sides of the wine business—from production to sharing his winemaking experience with visitors.
In the fall of '95, Marko realized he wanted to apprentice under his father and be the 13th generation to carry on the Karakasevic family tradition. That's when his parents realized: "He's the man we've been looking for."

From that point on, he has submitted to the same tough routine of generations of Karakasevic men and women before him: learning the winemaking, the distilling and the running of a family business where one must wear many hats. The Charbay Distillers' Port is a spirited salute to this father and son team. Marko conceived the idea of Charbay's whole-fruit flavored vodka program. He found the fruit and designed the packaging. Now, with two generations of enthusiastic winemakers/distillers behind the Charbay label, there are even more releases of "perfumes for the soul" to watch for.

Give Marko a few days off and he'll head down to Baja. There's a little town where they all know him and he enjoys being on the water or riding four wheelers. BV, 'Before Vodka', his travels were longer. One was a summer trip through South America with time in Cusco and Machu Picchu during the Summer Solstice. Lately his trips have been New York and Las Vegas! Marko, like everyone in this family, likes to travel & explore. No matter where he roams, always loves coming home to his St. Helena and his mountain top.

Marko married his long-time girlfriend Jenni Olson in April of 2009. Everyone agrees, she's a great addition to the family.

He became a Master Distiller with the release of his Doubled & Twisted Light Whiskey, after a nearly 30 year apprenticeship with his father. In the last five years or so, he has been moving more and more into the worlds of Whiskey and Tequila. Getting the opportunity to distill Tequila in the one of the most Iconic 75 year old distilleries in Arandas, Jalisco, the Highlands of Tequila, has been not only a wonderful experience, but, a game changer, a new path for Charbay. Being able to create a tequila in their (Marko and Miles) style with their concepts and their distilling methods, is something truly cherished. It shows too.

Whiskey also has also been a game changer. The fact that beer is distilled into whiskey, and by using Gold Medal winning drinking beer as his base "distiller's beer" has also allowed him to change the playing field, and carve out yet another niche.

Posted by Epicure Traveler at 11:45 AM No comments:

Decades in the making
ROCO represents the finest in Oregon winemaking — with storied bottles and humbling accolades. It’s a 30-year history of devotion to craft. 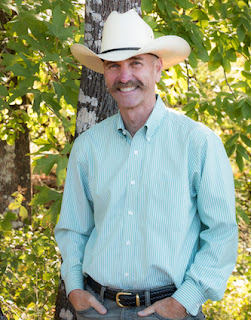 In 1987, Rollin Soles purchased a breathtaking hillside property down a gravel road in the Chehalem Mountain Range. The property’s perfect combination of elevation, soil type, natural springs, and geological aspect were the seed of a dream that would eventually become ROCO Winery.
For nearly fifteen years, the Soles’ property remained a mostly wild landscape used for a variety of farming endeavors. Rollin was making wine at Argyle, his previous venture, and Corby was busy serving in a number of executive positions in the Oregon wine industry. But as the years wore on, the property’s southwestern exposure and diverse soils begged for the Soles to realize their dream: a vineyard of Pinot Noir and Chardonnay sloping toward the creek below, the Chehalem Valley beyond, and Oregon’s Coast Range in the distance.
In 2001, Rollin and Corby planted Wits’ End Vineyard and began bringing the idea of ROCO to fruition. Two years later, they produced their first vintage of Private Stash Pinot Noir—showcasing the very best of Rollin’s small-lot winemaking skills in a bottle that was eventually served in the White House. Building on their success, in 2009, the Soles built ROCO its own winery and added a tasting room in 2012. In 2013, Rollin expanded Wits’ End Vineyard and transitioned to full-time focus on ROCO to keep pace with its growing prestige and demand.
Today, Wits’ End Vineyard remains the heart and soul of ROCO wines. ROCO Private Stash and Wits’ End Vineyard Pinot Noirs derive exclusively from these vines—and serve as Rollin and Corby’s testament to the beauty of place, their devotion to family and friends, and their commitment to Oregon winemaking at its finest. 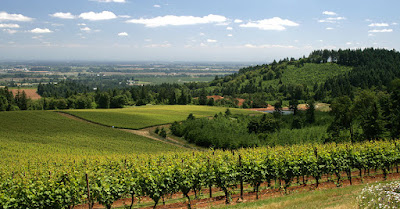 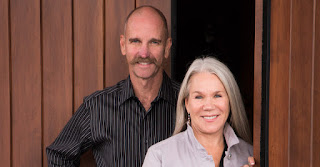 ROCO is [rock-ō]   Named for Rollin and Corby Soles
And logo...

The ROCO thunderbird logo represents an ancient petroglyph discovered in the Columbia River Gorge before the river was dammed. The thunderbird captures the wild essence and intriguing history of the Pacific Northwest and ROCO wines.

Born and raised in Texas, Rollin has been making exemplary Pinot Noir and Chardonnay in Oregon for the last three decades. Those close to him know him as a painstaking practitioner of the winemaking craft, with an exceptional eye for detail in harvesting, crushing, and fermentation. And the results are in.
Rollin’s wines have been named among the Top 100 Wines of the World by Wine Spectator thirteen times, a distinction matched by no other Oregon winemaker. His very first ROCO vintage was poured in the White House. And in 2013, he was named one of the “20 Most Admired Winemakers in North America” by Vineyard & Winery Management magazine.
Rollin made his way to Oregon after winemaking stints in California, Switzerland, Washington, and Australia. Once in the Willamette Valley, he co-founded the prestigious Argyle winery and led its winemaking program for twenty-five years. In 2001, along with his wife Corby Stonebraker-Soles, he set out on a new path with the founding of ROCO Winery and the planting of its estate Wits’ End Vineyard. Today, ROCO is his full time work.
Rollin received a bachelor’s degree in microbiology from Texas A&M and a master’s degree in enology and viticulture at the University of California at Davis. His deep scientific background along with an abiding love of research and learning allows him to consistently unlock the potential of Pinot Noir and Chardonnay grapes and raise the bar for what Oregon wine can be. 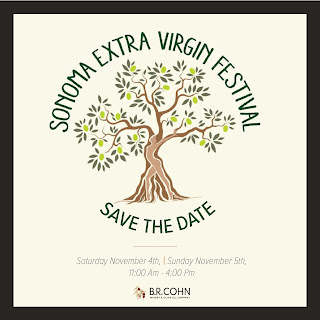 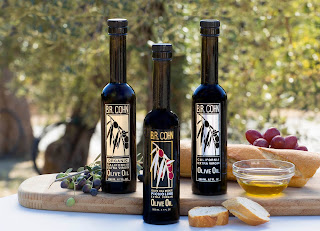 B.R. Cohn Winery—one of America’s premier producers of premium wine and extra virgin olive oil—announces the 2nd annual Sonoma Extra Virgin Festival (All Things Olive) will be held at the property on November 4th and 5th, 2017. A hallmark of the olive oil harvest in Sonoma Valley, the weekend event will commence with a hand harvest and blessing of olives from B.R. Cohn’s 160-year-old heritage trees. The olive harvest typically begins after the grape harvest concludes, leaving one more cause for celebration before the holiday season starts.

“We are blessed with a climate that is ideal for not only winegrowing, but for producing high- quality olives as well. It’s an honor to host this collaboration between local olive growers, producers, purveyors and artisans and showcase the best of what our region offers,” commented Debra Eagle, B.R. Cohn’s Estate Director. 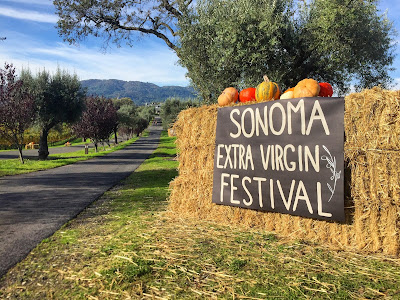 In 1974, to keep some sanity and preserve his family's quality of life, Bruce purchased an old dairy in Glen Ellen. With a drive to cultivate the existing vineyard, Bruce soon became intensely involved with all aspects of growing grapes, mentored by Charlie Wagner of Caymus. A decade after taking ownership of the land and having great success selling grapes to other wineries, Bruce founded B.R. Cohn Winery in 1984. 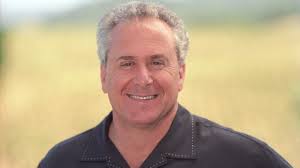 After selling the grapes from his Olive Hill Estate for many years and seeing the numerous awards the wines made with his fruit were receiving, Bruce began producing his own wines in 1984. Charlie Wagner then bestowed the greatest honor upon the winery, permitting the use of Caymus' trademarked "Special Selection" on the best lots from the estate. B.R. Cohn Special Selection Cabernet Sauvignon, as well as the entire portfolio, continues to receive strong reviews and accolades.

In the 1990, Bruce embarked on the journey of processing the olives at the Olive Hill Estate, creating California's first single estate olive oil in over a century, and founding the B.R. Cohn Olive Oil Company. Today we produce a selection of olive oils and wine vinegars, which are sold alongside our wines at the estate, as well as in select gourmet shops. 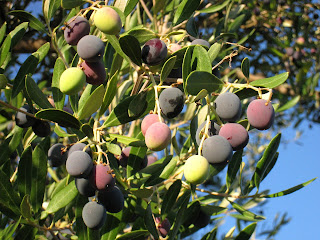 Posted by Epicure Traveler at 7:14 PM No comments: