Tonight, Slow Living Explores the lives of a woman who has used Eastern techniques to build a full and healthy life.  Our guest, Anlor Davin, uses Zen to help manage Autism and has overcome huge battles.

Being Seen is a memoir about an autistic woman struggling not only to be seen but to be understood and respected. 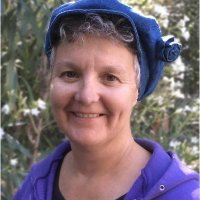 Anlor (from Anne-Laure) Davin is autistic. She was diagnosed at age 46, a life-changing, and life-saving, event she traces to her Zen practice of the years preceding. Anlor is an immigrant, born in France in 1964. During Anlor’s childhood her native France was in the grip of oppressive and now discredited theories about autism. Anlor instinctively knew she had to flee France in order to survive.
Upon arrival to the Unites States in 1987, Anlor lived in Chicago, Illinois, were she married and had a son. The ensuing eighteen years of child-rearing, a tremendous challenge for an autistic mother, overwhelmed her and her life slowly but surely unraveled. Forever searching for answers to the challenges of an undiagnosed autistic life she moved to San Francisco, California, in 1999. There she started a Zen practice while she eventually became very ill and “hit bottom”. In March 2000 a painful and debilitating movement disorder appeared in her left upper body.
Anlor was finally formally diagnosed in 2010. With proper medical care and many other supports her life improved unexpectedly and dramatically. This healthy outcome and Anlor’s later fullness of life give her a secure place to stand and reflect with greater clarity on her journey. She now lives near San Francisco with her partner, her son living nearby.