On Tuesday, December 21, 2010, Slow Living Radio celebrated a special broadcast from the inaugural Napa Truffle Festival hosted at the Westin Verasa. It was a unparalleled weekend of scientific exploration, education and culinary marvel in praise of the sumptuously irresistible family of fungi know as the black truffle! 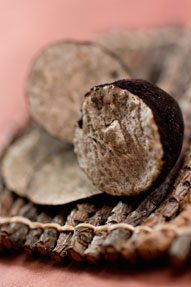 The Napa Truffle Festival, introduced by The American Truffle Company and presented by Lexus, brought together two complementary aspects involving European truffles: world renowned  chefs for their truffle cuisine, and the leading truffle scientists recognized for their expertise and data on truffle cultivation, Dr. Paul Thomas and Dr. Alexander Urban. Gourmets and intended truffle growers each found unique activities during the festival from a farm tour to seminars to truffle laden meals, to satisfy their craving for truffles and for knowledge.

Recognized globally as a culinary mecca, as well as one of the top wine-producing regions in the world, Napa Valley served as the host for the festival weekend. Napa is also home to some of the world's finest restaurants, many of which provided seasonal truffle menus in conjunction with the festival. The Westin Verasa Napa became "truffle central" throughout the weekend - a perfect choice considering Executive Chef Ken Frank’s coveted LaToque Truffle menu, now in its 29th year.
Chef-educator Doug Duda, who is known for his engaging and exciting style on and off television, gave the keynote speech for the festival kickoff.  Part of the festival's mission was highlighting and helping to improve the still-widespread hunger here in the U.S. and globally.


As the Napa Truffle Festival showcased one of the most treasured foods in the world, it also contributed part of the proceeds from the event to the Hunger Project and Feeding America.