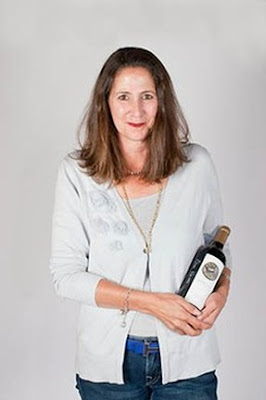 Sharon Kazan Harris is a Napa Valley winemaker and entrepreneur who combines her wine connoisseurship and business savvy in seminars educating business professionals. Kazan Harris--- who has educated thousands of executives at seminars and tastings over the last seven years--- is taking her seminars on the road this spring. Kazan Harris has conducted wine education seminars (with topics such as “Take Back The Wine List”) for clients including Bain, Stanford University School of Medicine, Squire Boggs, Orrick, Aetna, Nawbo, KL Gates, Merrill Lynch and Greystone, among others. She also has a special affinity for women’s leadership initiatives, diversity and empowering women.

The tour will also be the ‘traveling launch’ of the 2017 RARECAT Rosé, a distinctive and delicious blend of 90% Grenache Rouge and 10% Viognier, with a California appellation, which sells for $36.

“I enjoy using wine to connect people with purpose since wine is a powerful business tool,” she explains. She will be conducting seminars as team building for corporations as well as hosting winemaker lunches and other appearances, highlighting RARECAT’s current releases.

To hear more from Sharon and her story on a past show, click here:

Dan Goodman and George Rothwell are bringing song and history to the Lincoln Theater stage in Yountville, on Saturday 3:00 PM, April 28, 2018. “George related his concept to me’” states Dan Goodman, “shortly after my last show at the Lincoln Theater and explained how the music of the WWII years spoke to that generation.”.

Torch Songs of WWII promises an unforgettable performance from Napa’s most
talented musicians.

Tickets are available at the box office or on line. www.lincolntheater.com 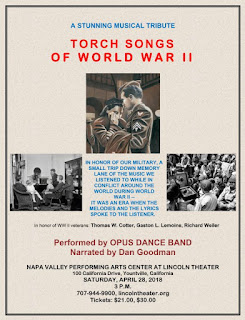 About Dan Goodman: A career of show business and creativity that spans over 70 years.

Born and raised in the bayous of Louisiana Bob grew up singing and playing sax, guitar and fiddle in his dad’s club, the largest club in the state. He cut his teeth playing alongside legends such as a young Willie Nelson and others. Later he would go on to play and record with dozens of well-known artists, including Fiddling Frenchie Burke, Gate Mouth Brown, Johnny Lee, the Osmond Brothers, Wayne Toups, Jimmy Swaggart, Maria Maulduer, Freddy Fender, Doug Kenshaw, Hank Williams Jr., Bill Champlin (Chicago), Bobby Kimble (Toto), John Elefante (Kansas), John Caffert and the Beever Brown band.

He has played on numerous TV shows such as Hee Haw, Solid Gold, the Ralph Emery Show, Nashville Now, Sound Stage, as well as many various regional PBS shows. Bob has played for myriad of people across the globe, including Princess Grace and Ronald Regan. His versatility and style on stage make him a great addition to any lineup.