One of my favourite bakers/pastry chefs has to be Ethan Howard from Cavallo Point Lodge, The Lodge at Golden Gate.  It doesn't hurst that his place of work sits on stunning grounds right under the Golden Gate Bridge, surrounded by the aromas of eucalyptus trees (gum trees).  You'll taste some of his delectable breads dining at Farley Bar and Murray Circle, as well as mouth watering desserts.  And at their Mercantile, you'll find some of his goodies to take home.  I begged Ethan for his Hazelnut Rosemary Crackers recipe - it's so flavourful, short and great with cheese and wine. 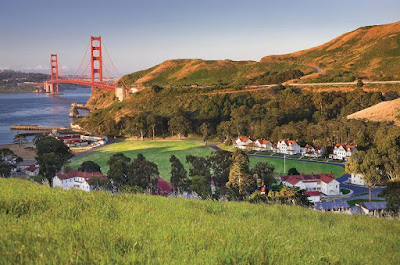 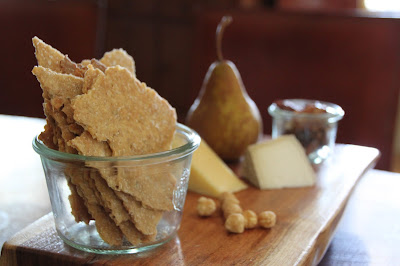 Makes about 40 crackers, depending on size

Preheat oven to 325˚.  In a mixing bowl, combine the dry ingredients with the hazelnuts and rosemary.  Place mixture in a mixer, and using the paddle attachment on slow, gradually add the milk in three intervals. Increase the speed and slowly add the olive oil.  Mix for about 5 minutes or until the dough is moving around in the bottom of the bowl instead of being stuck at the bottom.  (You can also do this in a large bowl using a spatula).

Sprinkle salt on top of the crackers and place into the oven for 7 minutes.  After 7 minutes turn the sheet pan 180˚ and bake another 10-15 minutes or until golden brown.  Cool to room temperature on a wire rack then transfer to a sealed container. Store In a cool dry place for up to a month. 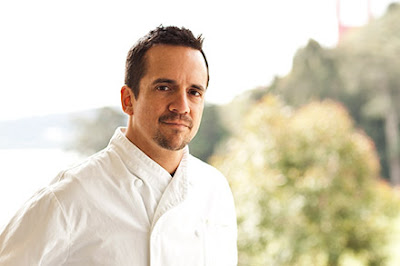 Ethan Howard, pastry chef at the award-winning Murray Circle restaurant, uses fresh, local ingredients to create the refined, sweet treats that complement Murray Circle's ever-changing, seasonal menu. Chef Howard believes in the importance of natural simplicity and embracing the true essence of ingredients' natural flavours.
From the age of six while growing up in San Jose, Calif., Chef Howard knew he wanted to be a chef. He initially developed his sweet tooth for pastries while working with Chef François Payard in New York City. It was there he learned basic techniques and developed a passion for the art of baking French-style pastries.
Building upon his prior experience in New York City, Chef Howard had the opportunity to fine-tune his preparation techniques studying refined pastry at The French Laundry with Pastry Chefs Steven Durfee and Sebastien Rouxel. His next adventure led him to The Martini House in St. Helena, where he defined the pastry menu that served as a finale to the restaurant's rustic menu. Before starting his position at Murray Circle, Chef Howard worked as a pastry chef at Bouchon and Bouchon Bakery in Yountville, Calif.
Chef Howard has developed a fond appreciation of working in Marin County due to the abundance of organic, seasonal ingredients available in the area. He has a genuine passion for experimenting with unexpected flavor combinations and he searches for his creative inspiration in everyday life and art.
Consistently sought after to create his renowned signature sweet finishes for tastings and special events around the region, Chef Howard was also named one of the Top 5 Pastry Chefs in the U.S. by Gayot in 2008.