Slow Living Radio celebrates Halloween with an interview with Bowling Green State University Visiting Professor, Dr Esther Clinton.  She enlightens us on some Halloween history and tradition, the reason we dress up and scare each other, as well as some Heavy Metal!

Next we talk with Jennifer Kosicki, Campaign Director for Light the Night, about the Night Walks to raise money for Leukemia and Lymphoma research. 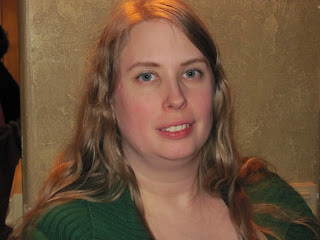 Esther Clinton is Visiting Assistant Professor in the Department of Popular Culture at Bowling Green State University.  She received her Ph.D. in Folklore at Indiana University with a focus on narrative, proverbs, comparative mythology and Old Norse and Old English literature.  Her research interests include popular literature (especially mystery, fantasy, and science fiction), folk religion, folktales and legends, monsters, and Southeast Asia.  Dr. Clinton has also written about heavy metal music and was one of the organizers of the BGSU Heavy Metal and Popular Culture International Conference in 2013.  Her work has appeared in Asian Music, Journal of the National Medical Association, Proverbium, and in the books Archetypes and Motifs in Folk Literature and Heavy Metal and the Communal Experience.

The Light The Night Walk is a fundraising campaign benefiting The Leukemia & Lymphoma Society (LLS) and their funding of research to find blood cancer cures.

It's about Funding Research

Nationally, Light The Night participants raise an average of $250. Raise $1,000 or more to become a member of our Bright Lights Club. Together, Bright Lights Club members raised more than $17.2 million last year in support of our mission. Join the club that is funding cures today and you will receive special recognition! Click on the incentives link to see the exclusive Light The Night recognition items.

Now with a little bit of our own research, thanks to HalloweenHistory.org, 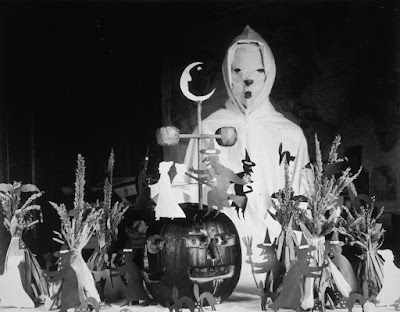 Halloween history is one of mystery and intrigue, the story of Halloween’s past has been passed down through generations. Traditions and adaptations of ancient ceremonies and superstitions have evolved into the holiday we know and love today. We’ll explore the history of Halloween in various forms, and unlock the dark secrets of this ancient holiday.
Halloween is a holiday celebrated on the night of October 31. The word Halloween is a shortening of All Hallows’ Evening also known as Hallowe’en or All Hallows’ Eve.
Traditional activities include trick-or-treating, bonfires, costume parties, visiting “haunted houses” and carving jack-o-lanterns. Irish and Scottish immigrants carried versions of the tradition to North America in the nineteenth century. Other western countries embraced the holiday in the late twentieth century including Ireland, the United States, Canada, Puerto Rico and the United Kingdom as well as of Australia and New Zealand.

Halloween has its origins in the ancient Celtic festival known as Samhain (pronounced “sah-win”). The festival of Samhain is a celebration of the end of the harvest season in Gaelic culture. Samhain was a time used by the ancient pagans to take stock of supplies and prepare for winter. The ancient Gaels believed that on October 31, the boundaries between the worlds of the living and the dead overlapped and the deceased would come back to life and cause havoc such as sickness or damaged crops.
The festival would frequently involve bonfires. It is believed that the fires attracted insects to the area which attracted bats to the area. These are additional attributes of the history of Halloween.
Masks and costumes were worn in an attempt to mimic the evil spirits or appease them.

Where Trick or Treating come from?

Trick-or-treating, is an activity for children on or around Halloween in which they proceed from house to house in costumes, asking for treats such as confectionery with the question, “Trick or treat?” The “trick” part of “trick or treat” is a threat to play a trick on the homeowner or his property if no treat is given. Trick-or-treating is one of the main traditions of Halloween. It has become socially expected that if one lives in a neighborhood with children one should purchase treats in preparation for trick-or-treaters.
The history of Halloween has evolved. The activity is popular in the United States, the United Kingdom, Ireland, Canada, and due to increased American cultural influence in recent years, imported through exposure to US television and other media, trick-or-treating has started to occur among children in many parts of Europe, and in the Saudi Aramco camps of Dhahran, Akaria compounds and Ras Tanura in Saudi Arabia. The most significant growth and resistance is in the United Kingdom, where the police have threatened to prosecute parents who allow their children to carry out the “trick” element. In continental Europe, where the commerce-driven importation of Halloween is seen with more skepticism, numerous destructive or illegal “tricks” and police warnings have further raised suspicion about this game and Halloween in general.
In Ohio, Iowa, and Massachusetts, the night designated for Trick-or-treating is often referred to as Beggars Night. 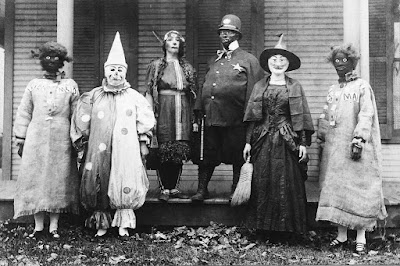 Part of the history of Halloween is Halloween costumes. The practice of dressing up in costumes and begging door to door for treats on holidays goes back to the Middle Ages, and includes Christmas wassailing. Trick-or-treating resembles the late medieval practice of “souling,” when poor folk would go door to door on Hallowmas (November 1), receiving food in return for prayers for the dead on All Souls Day (November 2). It originated in Ireland and Britain, although similar practices for the souls of the dead were found as far south as Italy. Shakespeare mentions the practice in his comedy The Two Gentlemen of Verona (1593), when Speed accuses his master of “puling [whimpering, whining], like a beggar at Hallowmas.”
Yet there is no evidence that souling was ever practiced in America, and trick-or-treating may have developed in America independent of any Irish or British antecedent. There is little primary Halloween history documentation of masking or costuming on Halloween in Ireland, the UK, or America before 1900. The earliest known reference to ritual begging on Halloween in English speaking North America occurs in 1911, when a newspaper in Kingston, Ontario, near the border of upstate New York, reported that it was normal for the smaller children to go street guising (see below) on Halloween between 6 and 7 p.m., visiting shops and neighbors to be rewarded with nuts and candies for their rhymes and songs. Another isolated reference appears, place unknown, in 1915, with a third reference in Chicago in 1920. The thousands of Halloween postcards produced between the turn of the 20th century and the 1920s commonly show children but do not depict trick-or-treating. Ruth Edna Kelley, in her 1919 history of the holiday, The Book of Hallowe’en, makes no mention of such a custom in the chapter “Hallowe’en in America.” It does not seem to have become a widespread practice until the 1930s, with the earliest known uses in print of the term “trick or treat” appearing in 1934, and the first use in a national publication occurring in 1939. Thus, although a quarter million Scots-Irish immigrated to America between 1717 and 1770, the Irish Potato Famine brought almost a million immigrants in 1845-1849, and British and Irish immigration to America peaked in the 1880s, ritualized begging on Halloween was virtually unknown in America until generations later.[/vc_column_text]
Trick-or-treating spread from the western United States eastward, stalled by sugar rationing that began in April 1942 during World War II and did Jack O’Lanternnot end until June 1947.

Early national attention to trick-or-treating was given in October 1947 issues of thechildren’s magazines Jack and Jill and Children’s activities and by Halloween episodes of the network radio programs The Baby Snooks Show in 1946 and The Jack Benny Show and The Adventures of Ozzie and Harriet in 1948. The custom had become firmly established in popular culture by 1952, when Walt Disney portrayed it in the cartoonTrick or Treat, Ozzie and Harriet were besieged by trick-or-treaters on an episode of their television show, and UNICEF first conducted a national campaign for children to raise funds for the charity while trick-or-treating.
Trick-or-treating on the prairie. Although some popular histories of Halloween have characterized trick-or-treating as an adult invention to re-channel Halloween activities away from vandalism, nothing in the historical record supports this theory. To the contrary, adults, as reported in newspapers from the mid-1930s to the mid-1950s, typically saw it as a form of extortion, with reactions ranging from bemused indulgence to anger. Likewise, as portrayed on radio shows, children would have to explain what trick-or-treating was to puzzled adults, and not the other way around. Sometimes even the children protested: for Halloween 1948, members of the Madison Square Boys Club in New York City carried a parade banner that read “American Boys Don’t Beg.

Halloween Around the World

The Day of the Dead celebrations might seem to be very similar to Halloween. In both celebrations people dress up in costumes, there are a lot of skeletons everywhere, and there are special sweet treats and candies given out. Also people spend a lot of time in graveyards and death imagery is everywhere.
But there are some big differences between the holiday that promotes fear of the dead and the holiday that celebrates the dead. The Day of the Dead holiday is about celebrating the dead, not being afraid of the dead. It’s a holiday for people to honor their ancestors and loved ones who have passed away and invite those spirits back into their homes to be part of the family once more. It’s a celebration of family and a show of respect for those who have passed away.
Posted by Slow Living Radio at 1:31 PM