Slow Living Radio explores... One story, an Austrian chef marries an American and starts an award-winning Grapeseed Oil Company - a first for Napa, using the seeds left over from the winemaking process.  The other, a gent of Austrian heritage who decides to bring a taste of his homeland to Napa and makes the Valley's first Grüner Veltliner, then wins a gold in Vienna!


Napa is a melting pot of cultures in wine and food, but one doesn't often think of Austria.  However, our guests this evening have made a significant impact to the valley in their own unique ways. Their stories are inspiring!

Founders, Food & Vine™, Inc., and Salute Santé Grapeseed Oil
﻿﻿
﻿﻿Having introduced grapeseed oil to the American market in 1995, Food & Vine, Inc., makers of Salute Santé, has remained the leader in the industry and the primary innovator in the brand.

The company’s high quality products are matched only by its environmental responsibility. Co-op America Business Network has certified Salute Santé as a green company that seeks out environmentally friendly methods wherever possible, as evidenced by their production methods, recycling programs and the grapeseeds themselves.  Food & Vine is certified by the Non-GMO Project as a GMO-free company.
Food & Vine, Inc., is located at 68 Coombs Street, Suite I-2, in Napa, CA  94559. More information is available by calling (707) 251-3900 or visiting the website at www.grapeseedoil.com.
About Salut Grapeseed Oil
It’s Delicious!
Salute Santé! Grapeseed Oil has long been the secret of gourmet chefs who love its light and nutty, yet neutral flavor. It has the unique ability to enhance the flavors of ingredients instead of overpowering them and leaves no greasy aftertaste! It makes savory marinades and salad dressings that will not cloud when chilled, so you can use them right out of the refrigerator. The high smoke point (485 F) makes it ideal for hot food preparation which means you can sauté, fry or bake without any smoking, splattering or burning. The excellent emulsification properties make it ideal for whipping mayonnaise and creamy dressings that will not separate when chilled. The Salute Santé! Infused Grapeseed Oils shine with delicious fresh flavors, making them ideal as a liquid spice in all your cooking or as a simple and delicious dip for bread in place of butter or margarine. 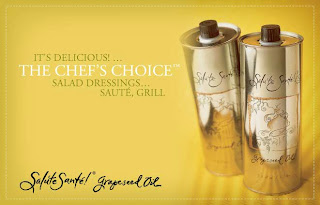 It’s Ecological!
Salute Santé! Grapeseed Oil is an ecologically sound product that is made from the seeds of grapes after the wine is pressed. There is no need for hybrid or genetically engineered crops, nor does it require new farmland, crops or water to produce.
It’s Healthy!
Salute Santé! means “to your health” in Italian and French. Grapeseed oil is high in vitamin E and is 76% essential  fatty acid, linoleic acid (also known as Omega 6). It is low in saturated fat, contains natural chlorophyll and valuable antioxidants (known as  proanthocyninidins). Studies have shown a unique ability that may significantly raise HDL cholesterol (the "good" cholesterol), lower LDL cholesterol (the "bad" cholesterol) and triglycerides; the effect of which may lower your risk of cardiovascular disease and impotency, something that no other food product has been known to do! It contains no cholesterol, no sodium and no preservatives such as TBHQ or BHT. It is not hydrogenated and contains no solvents, no trans-fatty acids or free fatty acids.
It’s Guaranteed!
Salute Santé! Grapeseed Oil is 100% natural Italian grapeseed oil. We sign off with our quality logo on every new batch of grapeseed oil which assures you the freshest and best quality grapeseed oil available. We guarantee a two year shelf life in our special dark glass bottle which filters out ultra violet light, unlike commonly used clear glass or plastic bottles.
For more information on our guarantee, visit the About Our Guarantee page.
It’s Kosher!
Salute Santé! Grapeseed Oil is certified Kosher by Rabbi Abraham Hochwald, Regional Rabbi for the Northern Rhine.
Rudy Von Strasser
Owner and Winemaker
Von Strasser Winery
The Von Strasser Story
With a family connection to Eric de Rothschild, Rudy wrote a letter asking to do an internship at Chateau Lafite-Rothschild. Each year the Chateau had been hiring an intern from the French winemaking program at Montpellier. Thinking that two minds are better than one, Mr. Rothschild invited Rudy to work for the 1985 harvest as their first American intern. (The result was so successful, that each year since the Chateau has chosen a new Davis graduate to work as an intern at the winery.) Rudy returned to Napa Valley in the spring of 1986 and was hired as the enologist at Trefethen Winery and Vineyards. In 1988, he became the assistant winemaker in charge of production at Newton Vineyards in St. Helena.
Shortly after their marriage in 1989, Rudy and Rita von Strasser set out looking for a vineyard property to make their home. Having already developed a deep passion and talent for producing Cabernet Sauvignon, Rudy was committed that the property must be in a microclimate blessed with the ability to grow and produce the finest red wines in Napa Valley; wines worthy to carry the von Strasser family name. Serendipitously, the old Roddis Estate Winery on Diamond Mountain had just been put on the market, and in the spring of 1990, the von Strasser label was born. 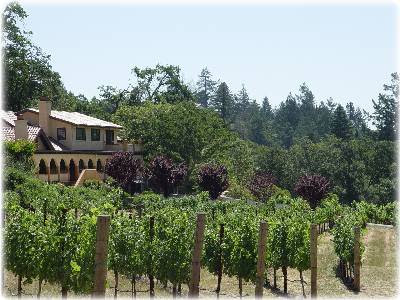 The history of the property reads like a who’s who of early California Cabernet History. After being denied a permit to turn his estate into a golf course, William Bounsall decided to subdivide his property, and in 1968 sold 1/3 of his property to Albert Brounstein. Canadian born, Al pioneered the modern decade of winemaking in this AVA by planting Cabernet Sauvignon in three distinct vineyard sites and bottling each separately under the name Diamond Creek Vineyards. The next year, 1969, Bounsall himself decided to get into the grape business and planted 2 acres to Cabernet Sauvignon with bud-wood from the famous Martha’s Vineyard. In 1978, Bill Roddis bought the Bounsall ranch and started Roddis Cellars. The wines were made by Andre Tcheistcheff, and in their days where considered by many to be the biggest wines made in the Napa Valley. In 1985, the winery was sold to the Gilby family (British gin), who used it as a corporate retreat. The vineyards, now totaling about 7 acres, were leased to Pine Ridge Winery, who bottled the grapes separately as their “Diamond Mountain” Cabernet Sauvignon.
In 1990, Rudy and Rita von Strasser bought the property and began the fulfilling task of renovating and modernizing the estate and the vineyards to make the property one of the gems of Diamond Mountain.
The building that houses the winery is an historic barn that was built in the late 1880’s. Through careful planning it has been remodeled into a modern winemaking facility while retaining its working-ranch charm. To take full advantage of the hillside location and to better control the variables of winemaking, the von Strassers added caves to their property. Dug into the virgin hills, these caves retain an ideal climate for barrel aging, and average temperature of 55 degrees and an average humidity of 80%.
The Judgement of Vienna
California’s First Grüner Veltliner Producer Wins Gold Medal In Vienna, Austria
﻿﻿﻿
﻿﻿﻿
In 2005, Rudy von Strasser, owner/winemaker of Napa Valley’s von Strasser Winery took an enological leap-of-faith and pioneered the planting of the famous Austrian white-wine grape called Grüner Veltliner in California. Although his customers immediately raved about the quality of this new wine, Rudy wanted to see how it ranked against the top wines of Austria. So last year, he sent a sample to the prestigious AWC Vienna wine tasting (which bills itself as the largest official wine competition in the world), and won a silver medal. Not content with merely good, this year Rudy sent his newest 2010 vintage to this Austrian blind tasting: the result was a GOLD MEDAL. Rudy von Strasser is a first generation American citizen; his mother is from Hungary and his father is an Austria.
In 2005 Rudy identified a small one-acre section of his Estate vineyard which he felt would be ideal for experimenting with the Austrian white grape. His total yield is extremely small; roughly 250 cases per year. Other than a few selected restaurants and retail locations, the wine is sold only at the winery.
For further information, call 707-942-0930 or visit http://www.vonstrasser.com