Each month Il Fornaio invites diners to join a culinary expedition through one of the diverse regions of Italy, celebrating the food found in each unique region. One of their chefs, often a native of the featured region, crafts a menu spotlighting the authentic Italian food and wine that is typically found it that particular part of Italy.  The journey is call “Festa Regionale”.
Currently Veneto is on the menu and we celebrate this region with Veneto native and Vice President and Executive Chef of Il Fornaio, Maurizio Mazzon.  We’ll also get a glimpse into the food of Sicilia the next featured Festa Regionale with native Sicilian Luigi Mavica, Chef Partner at the Palo Alto Il Fornaio.
For the menu and information about the food of Veneto, go to http://www.ilfornaio.com/Festa/festa0811menu.html.

A Taste of Veneto with Maurizio Mazzon 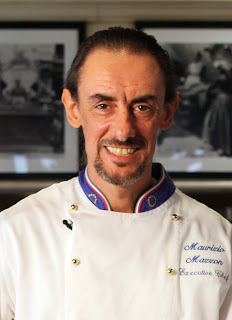 Maurizio Mazzon, Il Fornaio’s multi-talented Venetian-born executive chef brings his 25 years of culinary experience to every kitchen, every recipe and every menu served at Il Fornaio, breakfast, lunch and dinner. He also leads the company’s wine program and, coming from a family of bakers, is always coming up with new bread ideas inspired by the traditions of Italy’s twenty regions.
Born in Marcon, Veneto, Mazzon knew he would be a chef from the age of eight when he would cook shellfish caught with his brother off Punta Sabbaioni near Venice.  In fact, his brother, Chef Partner Mauro Mazzon, is the featured chef for this months Veneto Festa Regionale. 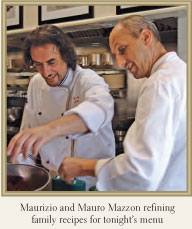 "It's about simplicity and balance," explains Mauro, who has been with Il Fornaio for twenty years. "The best dish is the one made with the freshest seasonal ingredients available." This was the main guiding principle for Mauro when he collaborated with brother Maurizio to create the Veneto menu

A TASTE OF SICILIA WITH LUIGI MAVICA
CHEF PARTNER 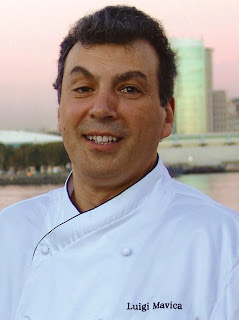 Native Sicilian Luigi Mavica was born in the sun-splashed village of Randazzo on the northeastern part of the island almost in the shadow of Mount Etna. He grew up in a family who shared a love and appreciation of fresh food and cooking. His father had a small garden that exploded with radicchio, tomatoes, basil and beans. His mother, Vincenza, was an excellent cook who didn’t use a lot of garlic or strong spices preparing these fresh garden vegetables. “I prefer a light feel to cooking,“ says Luigi, “I’m sure I get this from my mother.”
When Luigi was 10, his family moved to Syracuse, New York. To help with family expenses, Luigi got his first job at age 14 washing dishes in an American-style steak house. Eight months later he was promoted to line cook and began dishing out steaks and fries.
“When I started cooking, I really enjoyed it. I knew right away I wanted to stay in the business and work my way up.” With Luigi’s flair for cooking, it was easy for him to move up and he was recruited from restaurant to restaurant as his obvious talent developed.
Chef Mavica joined Il Fornaio in 1992 as Chef of the Palo Alto restaurant. Since joining Il Fornaio, he has gone on to open the Il Fornaio in Burlingame, been awarded “Il Fornaio Chef-Partner of the Year,” and led Il Fornaio’s first out-of-California restaurant and bakery.
Luigi became Chef-Partner of  Il Fornaio in the historic Sainte Claire Hotel in San Jose before returning to where it all began for him at Il Fornaio in Palo Alto. Drawing on his fond memories and visits to Sicily,
Chef Mavica has created a combination of dishes on this regional menu highlighting Sicily’s zesty cuisine as well as some of its more subtle additions to the Italian repertoire.  Buon Appetito!
Posted by Slow Living Radio at 2:09 PM