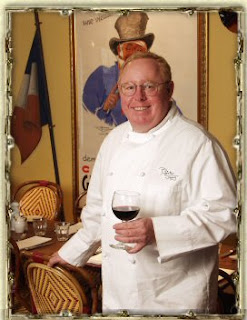 Slow Living Radio celebrated the community of the French lifestyle with Chef Philippe Jeanty of Bistro Jeanty.  In every day French life, it is the Bistro that is woven into the daily pattern of meals and celebrations. The Bistro is that little neighborhood restaurant where they know who you are, greet you warmly, and serve you satisfying foods that change with the seasons and define regional, homey French cuisine. Learn how the bistro lifestyle is a state-of-mind that can become part of your life, anywhere.
Philippe Jeanty has had a life long love affair with food. His restaurant in Napa Valley is a classic example of his philosophy on food and restaurants. Fresh quality ingredients, exacting and demanding preparation, consistent service at the table, comfortable and informal surroundings.

He was born in the Champagne region of France. This is a rural agricultural region where the wine is world famous for its' elegance and refinement. Philippe's father worked for the great Champagne house of Moet & Chandon. The family spent much of their time growing, raising, and preparing food. Their vegetables, chickens, rabbits, and lambs became an essential part of providing for the large family. It is from his grandmother and mother that Philippe learned many of the basics of French home cooking. Two of his fondest early memories are of visits to the neighbor's dairy for warm milk and special evenings with his family in the regional bistros where his favorite foods were to be found.

At fourteen his father helped him secure a summer position in the private dining room kitchen at Moet & Chandon, working under chef Joseph Thuet. He received special attention and training at Thuet's hand for the next three years and this secured his decision to make his life's work as a chef.

Philippe Jeanty came to California in 1977 with the first team from Epernay, France to open the Chandon Restaurant in Yountville. In a year's time he was made executive chef. This allowed Jeanty to develop his personal style of world class cuisine. A fine dining restaurant had never existed in the wine country before. Now residents and visitors could experience classic French Haute Cuisine in the bucolic setting of the Napa Valley.

The next twenty years of accolades, awards, and praise from customers and critics proved that Jeanty was one of America's finest chefs. His creative style introduced new flavors and dishes to the thousands of diners at Chandon during this time.

He began to look for a new challenge in 1997. His thoughts turned to his home in France. He decided to create a bistro where he could recreate all those favorite foods of his childhood. But with his heart and his family (wife and two daughters) in Yountville, Philippe Jeanty opened the doors of Bistro Jeanty in April of 1998.

Since then the doors have barely had a chance to swing shut. The crowds of patrons continue to come from around the world for the opportunity to dine in a true French bistro in America. It was chosen as the "Best New Restaurant in the Bay Area 1998" and chosen as one of four nominees for "Best New restaurant in America 1998" by the James Beard Foundation.

To know Philippe Jeanty you must come and eat at his restaurant. There you will better understand the man and his relationship with people and food. There is a shared excitement in the dining. As if you too have returned home, only to discover you are being served the most delicious food you can ever remember tasting.
Posted by Slow Living Radio at 11:07 AM