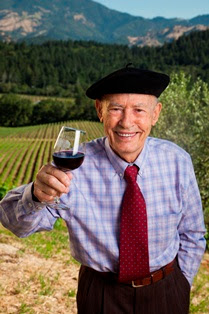 Tonight we meet an icon of Napa Valley winemaking, Mike Grgich of Grgich Hills Estate and learn about the great Paris Tasting of 1976 that turned the tides for American wines.  Then we pulled in legendary chef Bob Hurley of Hurley's Restaurant in Yountville to join the conversation, talk about Grgich wines, wild game, and more!

About Mike Grgich
An inductee to the Vintner Hall of Fame, Miljenko "Mike" Grgich is a legend in the Napa Valley. Over the past 50 years, Mike's wines, crafted in the classic Old World tradition, have won a stream of California and international prizes, establishing Grgich Hills Estate as one of the premier wineries in the U.S. and the world. Passionate and relentless in his quest for quality, Mike has also helped pioneer a number of significant breakthroughs in California winemaking techniques, including the use of cold sterilization and malolactic fermentation and the use of oak barrels for proper aging. For his contributions to the wine industry, he was presented a Lifetime Achievment Award by the California State Fair in 2008.

Mike's most celebrated achievement came in 1976 when a Chardonnay he crafted for Chateau Montelena beat the very best wines in France in a now famous blind tasting in Paris. This event that stunned the wine world catapulted the Napa Valley into the front ranks of the leading wine-producing regions of the world. "For years, everybody in the world believed that only French soils could produce great wines," Mike explains. "We shattered that myth. That was probably the most significant result of the Paris tasting. Our victory pumped new energy into the California wine industry, particularly in the Napa Valley, and it energized winemakers in many other parts of the world, such as Argentina and Chile. They realized that if we could do it, so could they."

Mike's success in America grew naturally from his family roots deep in the soil of his native Croatia. Miljenko Grgich was born April 1, 1923, in the village of Desne on Croatia's Dalmatian coast. The family owned a small winery and vineyard, and every year his father made wine, as did his grandfather and great-grandfather before him. As a toddler, and one of 11 children, Miljenko was weaned from his mother to a 50-50 mixture of water and red wine and at the tender age of three he began stomping grapes. Later he went to business college and then, in 1949, he went to the University of Zagreb, where he studied chemistry, enology, microbiology, soil biology, meteorology, irrigation, plants, fruit and grapes, all in preparation for becoming a winemaker.

Mike was miserable, though, under communist rule in Yugoslavia. So, in 1954 in search of freedom, he fled to West Germany and then made his way to Canada. But his dream destination was always America. A professor in Zagreb had told him that California was paradise, and he had long been inspired by stories of self-made Americans like Henry Ford, Andrew Carnegie, and John D. Rockefeller. In 1958, Mike finally made it: with one small suitcase he arrived in the Napa Valley. Immediately he went to work for Lee Stewart, founder of Souverain Winery and an early Napa Valley pioneer. After one harvest, Mike moved to Christian brothers and then on to Beaulieu Vineyard where he spent nine years working alongside the legendary Russian winemaker André Tchelistcheff. In 1968, eager for more responsibility, Mike became chief enologist at the most innovative winery at the time, the Robert Mondavi Winery.

"In 1969, I made my first Cabernet for Robert Mondavi," Mike recalls. "I introduced malolactic fermentation and other methods we had been developing at Beaulieu. Then, in an important blind tasting, fifteen California winemakers proclaimed ours to be the best Cabernet in all of California."  In 1972, Mike joined Chateau Montelena as winemaker and limited partner. Four years later the success of his Chardonnay winning the Paris Tasting led to fulfilling his life long dream of owning his own winery. In 1977, joining forces with Austin Hills of the Hills Bros. Coffee family, Mike created Grgich Hills Cellar, located in Rutherford, the heart of the Napa Valley. The following year, Mike scored another huge victory in "The Great Chicago Showdown." There, 221 Chardonnays were brought together for a historic first, the largest blind tasting ever held of wines made from a single varietal. And Mike's Grgich Hills 1977 Chardonnay emerged triumphant with a first place ribbon. Mike later became affectionately known as the "King of Chardonnay."

Mike's influence also continues to spread. In 1996, he returned to his native Croatia and opened a new winery, Grgić Vina, to make fine wines and to bring Croatia the latest in modern winemaking techniques. In one of his proudest accomplishments, in 2002 Mike played an instrumental role along with University of California, Davis, Professor Carole Meredith in tracing the mysterious roots of California Zinfandel back to its surprising source: his native Croatia. In 2006 the winery switched to solar power and in 2007 Grgich Hills became completely estate grown and changed its name to Grgich Hills Estate in recognition of that significant achievement. Today, Grgich Hills owns 366 acres of vineyards throughout the Napa Valley and produces 70,000 cases of award-winning estate grown wines. Mike's continued commitment to making wine as naturally as possible has led to all five vineyards being certified organic and Biodynamic®.
Mike continues to guide Grgich Hills Estate and to plan for its future. While some Napa Valley wineries look to expand, Mike and his daughter, Violet Grgich, and his nephew Ivo Jeramaz prefer to stay small and to focus on improving the quality of their vineyards and wines, always according to Mike's unique artistic and intuitive touch. As Mike explains, "There is no sure-proof scientific formula for making great wines. Over the years I have learned to communicate with the wines and how to nurture them. I realized that you don't make wine only with your head and your senses. You make wine with your heart. You have to pour your heart and your love into the wine. To me, wines are like my children. You have to love them and guide them like children, and you have to transmit to them the richness of your spirit."


﻿ Chef Bob Hurley is a world traveler and devotee of the culture, cuisine and lifestyles of many other countries.  His inspiration and innovative style have been largely influenced by his mentors, two renowned San Francisco chefs; the late Masa Kobayashi, a master of blending classic French cuisine with Japanese esthetics and creativity, and Jeremiah Tower, one of the early architects of California cuisine.  Chef Hurley became the executive chef of the Napa Valley Grille in Yountville in 1992, where he transformed local ingredients into dishes with a Mediterranean accent.

During this time, Bob honed his interpretation of wine country cuisine, and in 1998 he won the Hot Concept Award from Nations Restaurant News.  In 1999 Bob was chosen by Cooking Light magazine as one of the five Shining Star Chefs in the US.  In October 2002, Bob opened his own restaurant, Hurley's, in Yountville.  ###
Posted by Slow Living Radio at 8:56 PM