World-renowned, Fairmont San Francisco presents an awe-inspiring picture of historic San Francisco. The grandeur of the luxury hotel atop Nob Hill coupled with its reputation for impeccable service promises a truly memorable experience during a San Francisco vacation. Known for turning moments into memories for leisure and business travelers alike this luxury San Francisco hotel has been host to some of the most influential meetings and events, breathtaking weddings and personalized special occasions of the century.
With a panoramic view of the City and the Bay from high atop Nob Hill, Fairmont San Francisco hotel presents an unmatched blend of luxurious accommodations, elegant meeting spaces and superb services, which make for an unforgettable stay.  Centrally located, this luxury San Francisco hotel is a short cable car trip from the bustling Downtown, Financial District, Union Square and Fisherman's Wharf. In fact, Fairmont San Francisco hotel is the only spot in San Francisco where each of the City's cable car lines meet.
Fairmont San Francisco offers three fabulous dining options.  Tonga Room & Hurricane Bar offers exotic Asian cuisine, along with the City's best Mai Tai, in the unforgettable setting of a tropical rainforest. Laurel Court Restaurant & Bar offers a true San Francisco fine dining experience featuring local ingredients and fresh seafood from San Francisco Bay, paired with one-of-a-kind wines from the area's top boutique wineries and local craft beers in San Francisco.  Inspired by the cafes of Europe, Caffé Cento combines the coffee of illy with the chocolate of Ghirardelli and the hospitality of Fairmont.
In June 2010, Fairmont San Francisco, in partnership with Marshall’s Farm, installed honey beehives in the hotel’s culinary garden. This home-harvested honey is used in soups, salad dressings, pastries and as an accompaniment to the hotel’s time-honored afternoon tea service.  It is also used in Fairmont San Francisco’s own Honey Saison Beer, which is offered on draft in Laurel Court Restaurant & Bar.

Regional Vice President - California & General Manager of The Fairmont San Francisco
“Select, lead, train and recognize,” is Klein’s mantra and personal mission statement toward providing exceptional guest service. Klein focuses on the customer and finds creative ways to satisfy guests’ needs while prioritizing colleague training to ensure that staff continues to provide uncompromising levels of service. Two years ago, Mayor Newsom presented a “Certificate of Honor” for his tireless public service and philanthropic contributions. During daily interaction with staffers at all levels, he constantly inspires colleagues to provide exceptional guest service. Klein brings the same intense level of engagement to his charitable endeavors. In 2012, Klein led an unprecedented city-wide crusade that united San Francisco hoteliers in a “Million Dollar Mission” (MDM) benefiting the Leukemia & Lymphoma Society. Enlisting colleagues’ specialized skills and corporate support, this groundbreaking campaign raised funds for financial, education and social services for those affected by blood cancer. Tom’s hard work on this campaign positively affected not only the Hospitality Industry, but the community as a whole. In 2012, Klein was honored with CH&LA’s GM of the Year Award and in 2013 he received the Hotel Council of San Francisco’s Lifetime Achievement Award.

Executive Chef Andrew Court brings three decades of experience and a lifetime of passion for cuisine to his role at the iconic Fairmont San Francisco.  Court has worked with inspiring chefs from Europe to the Caribbean, gaining a strong combination of technical knowledge and personal connection to food that now enables him to present guests with the very best of Northern California’s celebrated fare.
In his role, Court leads The Fairmont San Francisco’s culinary operations, including banquets and catering as well as the hotel’s signature Laurel Court Restaurant & Bar and Tonga Room & Hurricane Bar.  Prior to joining The Fairmont San Francisco, Court served as Executive Sous Chef at another landmark hotel, The Fairmont Royal York in Toronto, Ontario.

“As a chef and new resident of the Bay Area, I am excited to continue and grow the strong relationships that The Fairmont San Francisco has forged with this wonderful region’s best purveyors,” says Court. “These local ties are what enable our hotel to create authentically local, seasonal menus and create vivid dining memories for our guests.”
Court believes in being a hands-on executive chef and enjoys working in the kitchen alongside cooks to teach them and collaborate in developing new dishes and techniques. Despite his expertise and varied roles throughout his career, Court very much considers his own culinary education ‘a work still in progress’ and continues to seek out ways to add to his gastromonic repertoire.
Court’s progressive career in culinary leadership began in his native Birmingham, England and kept him in the UK until 1990, when he took an opportunity to work in Cologne, Germany then the island of Madeira.  Next he headed to Bermuda, where he was employed by the famed Fairmont Hamilton Princess for a period of his time there.  In 1997, he arrived in Canada, working as Sous Chef at The Fairmont Algonquin Hotel in New Brunswick, before making his way to Vancouver.   Thereafter he held executive positions at several other hotel brands and award-winning restaurants and attended the 2006 Torino Winter Olympics, representing Canada and Jet Sports, for their VIP guest attendees.  He also oversaw a Vancouver casino’s $5 Million food & beverage renovation in preparation for the 2010 Winter Olympics.
In addition to culinary pursuits, Court counts motor sports, sailing and rugby amongst his favorite pastimes.

Eric has many years of progressive experience in the Food & Beverage division. His career began when he was selected in 2004 as Banquet Manager for Hyatt Regency Westlake, in Westlake Village, California. In April of 2006 he transferred to the Hyatt Regency O’Hare in Rosemont, Illinois as their Beverage Manager. He was subsequently promoted to Director of Outlets at the same property, a role he held from 2006 to 2008. In April 2008 Eric joined the Hyatt Regency Hill Country Resort and Spa, San Antonio, Texas as Assistant Director of Food & Beverage and held that position until 2010, when he transferred to Hyatt Regency Denver, Denver, Colorado as Assistant Director, Food & Beverage. Eric re-located to New Jersey in 2011 as Director of Food and Beverage, Hyatt Regency New Brunswick.  He is currently the Director, Food and Beverage at Fairmont San Francisco.

The Fairmont San Francisco created an indoor 75-foot swimming pool on its Terrace Level in 1929.  Known as the "Fairmont Terrace Plunge", the elaborate tile pool attracted local crowds as well as celebrities such as actress Helen Hayes, actor Ronald Reagan and members of the Water Follies.

In 1945, Metro Goldwyn Mayer’s leading set director, Mel Melvin, was hired to transform the Terrace Plunge into the Tonga Room.  The pool became a lagoon, a floating stage for the orchestra that entertained guests each evening.  Not surprisingly, Tonga Room was an instant success.

Tonga Room has been recognized as one of the nation’s hottest bars by InStyle, Gourmet, Travel & Leisure, Harper’s Bazaar and Wallpaper magazines and has been recently featured on ABC, Travel Channel & Food Network.

Tonga Room & Hurricane Bar has delighted guests with its tropical décor, decadent libations and Asian cuisine since 1945.  Having reigned as a swanky outpost of South Seas high style for much of its storied history, Tonga Room more recently gained a following as an icon of tiki’s pop culture heyday of the 1940s and 1950s.   Following a $1 million restoration by Gensler San Francisco, Tonga Room has rekindled the excitement of its unique and time-honored décor to recapture the glory of one of the nation’s first tiki palaces.

In June 2010, The Fairmont San Francisco, in  partnership with Marshall’s Farm, installed honey beehives in the hotel’s culinary garden in order to help support the bee population, which has decreased in number by 90 percent since the 1980s.
Beekeepers established four nascent beehives, each containing approximately 20,000 bees, in the culinary garden that is located outdoors on the hotel’s lobby level.  Currently beehives each house up to 50,000 bees.
The United States Department of Agriculture believes a virus is responsible for the collapse of honey bee colonies.  This situation is often called “CCD” or Colony Collapse Disorder.  Without honey bees, pollination is not possible.  The decrease of the honey bee population is extremely significant since one out of three mouthfuls in the diet is affected by the honey bee population.
The installation was the first step in cultivating the culinary garden, which now measures 1,000 square feet.  The garden contains rosemary, thyme, oregano, basil, chives and cilantro along with lavender.  Guests can view the culinary garden through floor to ceiling windows in the foyer leading to the hotel’s Pavilion Room.
“The cultivation of honey beehives marks the latest step in The Fairmont’s history of environmental stewardship.  Our hotel has been part of the fabric of San Francisco for more than a century and its success can be attributed to an enduring commitment to the local community and environment,” explains Regional Vice President and General Manager of The Fairmont San Francisco Tom Klein. 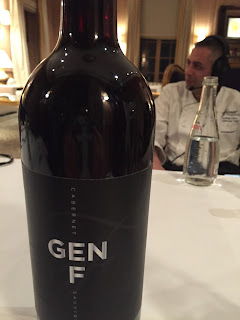 Hotels and Resorts in Fairmont’s West Coast Collection worked hand-in-hand with the award-winning winemakers at Raymond Vineyards to develop the exclusive Gen F California Cabernet Sauvignon and Chardonnay. Our Cabernet Sauvignon envelops the palate with red fruit flavors of raspberry, cherry and red plum with subtle notes of white pepper and vanilla. The elegant Chardonnay offers floral notes of honeysuckle and orange blossom with hints of almond balanced with bright citrus flavors and a touch of vanilla.