09/04 - Sweet Duets: Gelato and Dessert Wines with the Masters


This week we celebrate the second anniversary of Slow Living Radio with two masters of their craft, talking gelato and sweet wine.  Dr. Anthony LuPriore, a Mater of Gelato and co-owner of Frati Gelato, will enlighten us on "Mastering the Art and Science of Gelato"... not to mention becoming a physician in Italy, followed by a restaurateur and chef, and then a Gelataria owner in downtown Napa!

We then explore the world of dessert wine or "stickies" (as those Down Under would say), with Master Sommelier Gillian Ballance, from the beautiful and renowned Cavallo Point Lodge in Sausalito.


Anthony’s path to “Master of Gelato” and the newly opened downtown Napa gelateria, is a tale of many stories. Born and schooled in Rhode Island, Anthony was surrounded by food, and worked in his Uncle’s inn and butchery where he honed his butchering skills and learned to cook from his mother. With a passion for science, he obtained his degree in Zoology then uprooted himself to the small Italian city of Perugia to study medicine.  With Italy in his veins, he fell in love with the country and stayed for 30 years, first as a medical practitioner, specializing in angina.


His love for food soon lured him back to the restaurant world where opened a restaurant in Perugia as Executive Chef, learning the elements of true local Italian cuisine and winning awards of excellence each year.  His acclaim soon brought him the coveted position of food critic for La Nazione, Italy’s national newspaper.
With all these skills under his belt, fluency in Italian, and his years as a physician, Anthony was accepted into the famous Acadamia Gelateria, one of just a few applicants accepted in Italy’s only accredited institute for the renowned Italian delicacy.
There he learned that Gelato wasn’t just “ice cream” but an art and science that took great dedication, attention and care to maintain its wonderful dense, smooth texture and delicately balanced flavors, and the importance of the finest quality ingredients.
The desire to be back near family lured Anthony from the hills of Umbria to the USA, where he first opened Frati Gelato in Fullerton with his brother-in-law, Ron DeLay.  Much to the dismay of Fullerton fans, the family uprooted to relocate to the Napa Valley, which reminded him of Italy and the quality of life he loved there.

Enjoy Dr. Gelato’s tribute to true gelato and Italian life with us! 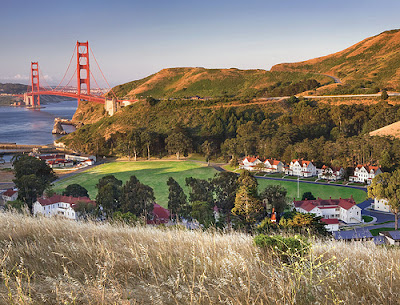 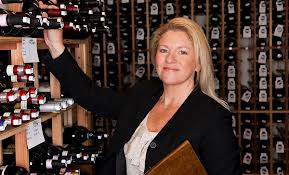 
Ms. Ballance comes to the lodge after serving as a wine consultant for the Pacific Union Club in San Francisco and Bottega Restaurant in Napa Valley. Formerly the PlumpJack Group's wine director between 2004 and 2009, she received Food & Wine Magazine's "Best New Restaurant Wine List 2005" for the newly opened Jack Falstaff restaurant.


Prior to her move to the Bay Area, Ms. Ballance was the opening wine and beverage director at Bacara Resort in Santa Barbara. There she created and oversaw the beverage program, including maintaining the 20,000-bottle wine cellar for Miro Restaurant.


Ms. Ballance came to Santa Barbara from New York City, where she worked at Picholine, Cello Restaurant and Windows on the World. She also has acted as a guest judge for several wine competitions and conducted wine seminars and lectures. She has completed the Advanced Sommelier level of the Court of Master Sommeliers examination program and has recently been awarded with Master Sommelier certification. She received her Higher Certificate of Distinction as well as her Diploma in Wines & Spirits from the British Wine and Spirits Education Trust. Ms. Ballance has a BFA from the Tisch School of the Arts at New York University and grew up in Tulsa, Oklahoma.

Moscato Granita with Crème Fraiche
I rarely have those moments when I actually want to use the “OMG” expression, but this was one of those.  I was testing a granite recipe using the Innocent Bystander sparkling Moscato and had frozen the wine in ice cube trays with sugar syrup on the side ready to test.  I plopped an iced wine cube in my mouth and there it was. “OMG”!  I knew there was going to be no need for the sugar, the wines delicious watermelon, rose and refreshing bite just burst forth in the frozen fine bubbles.  I simply added a finishing drizzle of Blackcurrant syrup to bring out the fruit in the wine, a dollop of crème fraiche for a lush smooth finish and some shaved chocolate to add the wine’s delicious musk notes. 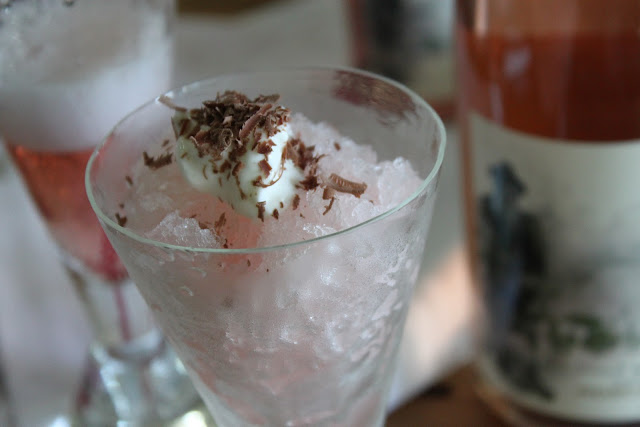 To serve 8
1 750 ml bottle Innocent Bystander Moscato
Elderberry or Blackcurrant syrup
Crème Fraiche
Optional for decoration, shaved chocolate and strawberries
Pour the wine into ice cube trays or a large shallow dish.  Freeze overnight.  An hour or so before serving, transfer desired amount to a food processor or blender and blend until just crushed.   Spoon into a dish and return to the freezer until ready to serve.
To serve, break up crystals and spoon into glasses or bowls.  Top with Crème Fraiche and drizzle over the syrup.
If desired, top with shaved chocolate and/or strawberries.
Cheers