Restaurateurs Lori Baker and Jefferey Banker of the renowned Baker & Banker Restaurant and Bakery join us tonight to talk about their paths to meet and then to start their own restaurant and adjoining bakery.

Their passion for quality, locality and sustainability have led them to have many close relationships with purveyors. One of these, Kenny Belov, who started TwoXFish, and Fish Restaurant and retail in Sausalito, joins us to talk about fishing for the good of the oceans, the fishers, and our own health. 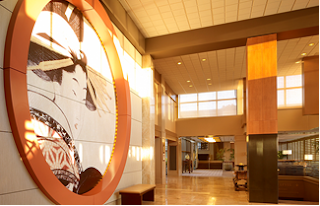 We broadcast this week's show at the serenely beautiful Hotel Kabuki, Baker & Banker's preferred local hotel where they recommend guests stay when dining with them.  Bathed in a zen-like, 'East-Meets- West' calm and exquisite decor and gardens, this hotel offers guests an escape within minutes of international-class shopping, dining and San Francisco sights.


Baker & Banker is a collective culinary idea, some 12 years in the making. Like most culinary couples, Pastry Chef Lori Baker & Chef Jeffrey Banker had dreamed of owning and running a restaurant for about as long as they had been together.

Early in their marriage, Jeffrey was a line cook at the Meetinghouse, an earlier incarnation of their current space. It was over the course of Lori’s many visits to the space that the two both fell in love with the building. Eventually (and in the subsequent decade or so that followed) they would refer to the space simply as “our restaurant”.

The pair came dangerously close to settling on a handful of other spaces, but thankfully fate intervened in the nick of time, and the two learned of the availability of “their restaurant”, at 1701 Octavia.


Since opening its doors in the Pacific Heights neighborhood of San Francisco in December of 2009, Baker & Banker has become a beloved neighborhood space and a destination dining spot.  With over 30 years combined cooking experience, Chef Jeff Banker and Pastry Chef Lori Baker, both in their mid-thirties, share a common subtle complexity in their cooking elevated by attention to detail and technique.

Combining their love of serious food & warm hospitality, they have opted to serve upscale dishes at reasonable prices, in an easy & comfortable setting. Sourcing virtually every ingredient direct from local farmers, and drawing significant inspiration from countless years of combined local kitchen experience, the food is perhaps best described as a small expression of the San Francisco food scene from which it was conceived. It is strictly market-driven and varied in cultural influences. 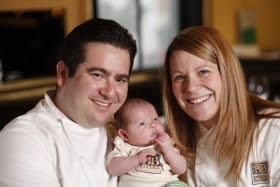 Lori Baker is the Pastry Chef/Owner of her debut restaurant, San Francisco’s Baker & Banker.  Opening the restaurant in Pacific Heights with her husband and Executive Chef Jeff Banker in December 2009, the two have been warmly welcomed to the neighborhood and quickly built a reputable profile in the Bay Area.  In August 2010, Lori launched the bakery adjacent to the restaurant.  Here she works to provide both sweet and savory items, as well as creating all the fresh breads and desserts for the restaurant.

Lori grew up in Cincinnati and went on to graduate from Johnson & Wales cooking school in Rhode Island. With an inherent love for baking reflected in her surname Baker, Lori moved to San Francisco to realize her dream of working as a Pastry Chef.  She later went abroad to intern at L’Angolo Dolce in Lucca, Italy and extended her education at cooking school along with a stage at Hotel Metropole in Brussels, Belgium.

Returning to San Francisco, Lori went on to work as the pastry chef at EOS, Home, Slow Club, Gordon’s House of Fine Eats and Bizou and pastry assistant at Postrio, Fifth Floor under Laurent Gras, and later Bix.  It was here in 2000 that she met Jeff Banker, her future husband.

Following her work at these esteemed San Francisco restaurants, Lori went on to teach as a professor of pastry at The California Culinary Academy.  During this time she and Jeff began to dream about opening their own restaurant and set out to find a space in which they could realize their vision.  Finding the former location of Quince, Lori and Jeff discovered it was the perfect spot to execute both a restaurant and bakery to each further their culinary creations.

The bakery in turn produces fresh breads, scones and muffins, as well as cookies such as the brown-butter chocolate chip cookies and specialty cakes. Giving guests a truly personalized experience, Lori works at the bakery by day and then greets guests in the evening in the restaurant’s dining room.

Jeff Banker is a chef by training whose early stints include Patina in Los Angeles and Postrio in San Francisco. He was more recently Sous Chef at Acme Chophouse and Bix, Executive Chef for three years at Home Restaurant, Guest Chef at the popular Mission Street Food, and he also staged at (Michelin three-star) Lucas Carton in Paris while attending Le Cordon Bleu on a scholarship awarded by the IACP.


After graduating high school, Jeff proceeded to take a year off before starting at Cal Poly Polytechnic State University, where he majored in Hotel & Restaurant Management. After three years of industry experience, he moved to Newport Beach to work at Pascal then continued up the coastline to work at Patina in Los Angeles.


Wanting to go abroad, Jeff moved to Venezuela where he lived for a year and a half, before returning to San Francisco at age 23.  Upon his return, Jeff began working at well known Bay area restaurants beginning with Postrio.  Assured of his desire to be in the kitchen, Jeff continued as the sous chef at Acme Chophouse and Bix.


To strengthen his culinary skill set, Jeff staged at Lucas Carton, a three star restaurant in Paris while attending Le Cordon Bleu on a scholarship awarded by the IACP.  In 2003, he returned once again to San Francisco as the Executive Chef at  Home restaurant, where he and Lori continued their work together. The pair learned an immense amount while being involved with the restaurant for three years, during which time   Home opened their second restaurant on Union Street.  Following his experience in these prestigious restaurants, Jeff spent time as a private chef for high profile clients on the Peninsula for two and a half years.  Both Jeff and Lori have also filled in at their friends’ restaurants Nopa and Delfina in the area.


At Baker & Banker, Jeff creates local and seasonal New American cuisine.  Playing on global ingredients and influences, many of the dishes stem from his travels to France, Italy, Southeast Asia, and beyond.  Compiled to create an ever-evolving menu with French technique and worldly influences, Baker & Banker provide guests with an intimate experience in the brasserie-style interior.  Both Jeff and Lori can be seen exiting the kitchen to mingle and create an extra-personalized touch for restaurant guests.

Innokenty Belov was born in Moscow, Russia in 1976. His family moved to the United States when he was five years old, and at 17 he was introduced to the world of ocean fishing in Florida. After moving to San Francisco in 1996, he left a career in professional photography to develop a new concept in environmentalism—a socially responsible restaurant with a soul focus on sustainability.
Kenny brought his tremendous passion and generosity to the food and beverage offerings of SalmonAID. He insisted that each restaurant providing food at SalmonAID take a pledge that they would never serve farmed salmon again – from this Fish or Cut Bait was born. Kenny now travels around the country educating restaurateurs and their patrons about the benefits of wild salmon and the economic and environmental damage brought about by salmon farming. In 2004, “Fish” in Sausalito, California opened its doors. Kenny’s commitment to local fishermen and true sustainability has created a unique entity combining waterfront dining with an ongoing commitment to consumer education about the state of the ocean and the truth behind sustainability.
Kenny and his Wife, Eden, live in Petaluma, California, with their dog, cat, three chickens, and two children—Isabella and Oliver—whom he has convinced, will still have healthy oceans and fish to eat when they grow up.

What you buy and when you buy makes an enormous difference to our oceans. The sources not only come from healthy fisheries, but they are also caught with the strictest standards of catch methods. These methods we have chosen do not deplete the resource, take unwanted by-catch or harm habitats. As the seasons change so should our buying habits; intelligent management of each fishery is based upon scientific evidence of how much each one can yield. Choosing fish that is in-season gives each species the time to fully recover from our demands for food.
All of our seafood is sourced from the fishing community directly, and there are no other wholesale operations or middlemen. More importantly, there are no tall tales about what the product is, how it was caught and whether or not it is truly sustainable. We are committed to a long term view of this renewable resource, and this list represents a diligent and honest assessment of what we must do to save the oceans for future generations, and provide fair wages and respect for the men and women who work so hard to fish in a responsible manner. 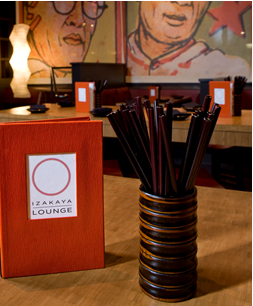 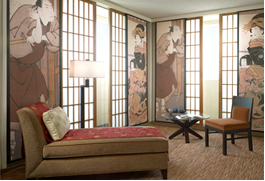