05/08 - A Celebration of International Mothers

In this Slow Living Show leading up to Mother's Day, we celebrate the success stories started by women who have brought their children into the US.  Many of these young people arrive speaking no English and having no understanding of American culture, yet defy the odds and pursue their goals with unparalleled energy and enthusiasm, encouraged lovingly by their mothers. 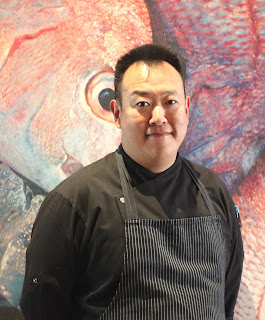 One such story is that of Chef Kang Kuan who was raised in Taipei before his mother brought him to the US as a 12 year old.  Earning a masters in Environmental Toxicology,  Chef Kang ended up as a celebrated chef, coming through the French Laundry and now running the culinary operations at Morimoto Napa.  His story is one of inspiration.  Read the full story below and tune in to hear how his mother played a role in his success. 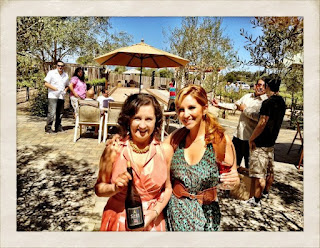 Amelia Moran Ceja, now president and owner of Ceja Vineyards, went from learning about flavors while cooking with her Grandmother in Las Flores, Mexico, before her mother brought her and her sister to join their father in Rutherford in 1967.  She took to the wine industry with  zeal, marrying Pedro Ceja and soon becoming the first ever female wine company president. Her daughter, Delia, joined the company as Director of Marketing after travelling for 6 months around South America. Together, mother and daughter have an amazing story that brings families, their passions, energies and drive into real perspecitive.

Nai Kang Kuan was born on July 1, 1973 in the city of Taipei amongst the hustle and bustle of 2.6 million people living in apartments and high rise condos.  He lived a happy but unremarkable childhood except for immigration to United States when he was twelve years old.  He moved into a house located next to the home Marilyn Monroe died in, in the upscale town of Brentwood, Los Angeles with his mom and an Italian heritage stepfather. To say the he had a bad case of culture shock is an understatement. 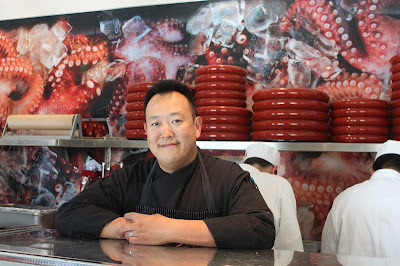 Kang’s first Christmas meal in his new home was bacalao (salt cod), pine nuts, raisins, and oil cured olives in a tomato sauce.  He spent much of his teenage years helping his stepfather remodeling the house as well as chores on the family farm in Napa Valley, California.  Some of these chores were just that, digging, pruning, and moving rocks.  But there were many other chores that become life lessons such as rebuilding the engine of the resident farm vehicle, a red 64 jeep, and the slaughtering and butchering of six angus steers.

Kang graduated from Pacific Palisades high school in 1991 and a Bachelor of Science degree in Soil Science from the University of California Riverside in 1996.  He moved to Cincinnati, Ohio to pursue a Master degree in Environmental Toxicology at the school of Medicine in University of Cincinnati.  Despite all the education and school, he was an indifferent student, making average grades in high school and college.  It wasn’t until grad school when he faced real academic challenge and realized that he was spending more time outside of the laboratory instead of in it.  The realization forced him to turn to his long time hobby, cooking.  After working in many restaurants in Cincinnati and Ontario Canada, he enrolled in the Culinary Institute of America, where he met his future wife on day one, and went on to a restaurant fellowship after graduation.  He has worked for CMC Rudy Speckemp in Baltimore Maryland, and Fabio Trabocchi of the famed Maestro at Ritz Carlton Tysons Corner, and Fiamma in New York City.  It was under Fabio’s tutelage and support, he arrived at The French Laundry in Yountville California where he worked for Thomas Keller, Cory Lee, and Tim Hollingsworth, staying for five years, rising from the ranks of commis to sous chef.

Kang was called on by Jeffrey Lunak, the opening Chef of Morimoto Napa to join the Morimoto team in October, 2010, and formally joined the kitchen in March 2011 after giving French Laundry a five months notice out of respect and gratitude.  He has since then moved on from the Executive sous chef position to assuming the full responsibility of the Culinary operation after Chef Lunak’s departure.

Amelia Morán Ceja
President and Owner,
Ceja Winery
http://www.cejavineyards.com/About-Us
t the dining room table that occupies a prominent place at the rural “world headquarters” of Ceja Vineyards, Amelia Morán Ceja reveals her conviction that the diligent pursuit of a passion is key to success. “My grandmother told me,” she says, leaning forward over her morning mint tea, “‘Whatever you do, if you love it and learn everything you can about it, you will be successful—and not dependent on a man.’” It’s advice that both Amelia and her husband, Pedro Ceja, have banked on. 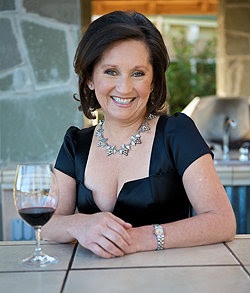 A strong matriarchal tradition in her family fostered Amelia’s independent spirit, but more than anything, Amelia feels it is flavors and her experience with food that have shaped her life choices. Long before the California legislature recognized Amelia as “Woman of the Year” in 2005 for “breaking the glass ceiling in a very competitive business,” the first Mexican-American woman ever to be elected president of a winery was on the frontier of wine. The dynamo behind more than 100 video blogs since 2008 on preparing Mexican cuisine and pairing it with wine, Amelia has introduced thousands to exciting flavor combinations they never dreamed of.
Amelia’s love affair with flavors started in Las Flores, Jalisco, Mexico, where she began cooking on her own at the age of eight in the farm kitchen of a strong maternal grandmother. “Mamá Chepa” taught Amelia to cook with fresh, home grown ingredients and to identify edible wild mushrooms by smell. When Amelia joined her father, Felipe Morán, in Rutherford in 1967, along with her older sister and mother, Francesca Fuentes Morán, Amelia threw herself into her new world. On her first weekend in the Napa Valley, Amelia was in the vineyard, harvesting with a knife that seemed half the size of the petite 12-year old.
That vineyard wasn’t just any vineyard. It was Robert Mondavi’s Tokalon Vineyard, where her classmate and future husband, Pedro, was also picking Merlot with his family. In the coming months at Robert Louis Stephenson School in St. Helena, Amelia advanced from the “academically challenged” level of 7th grade to the “most challenging” level in a matter of months, but it wasn’t until she was studying history and literature at UC San Diego, and collecting $5 per person from friends to create authentic Mexican cuisine wine dinners for them, that her future became clear: Pedro, cooking, and wine were the great loves of her life. In 1980, Amelia and Pedro pooled their dreams and marriage vows, and the energetic Amelia joined Pedro, his brother Armando, and their parents Juanita and Pablo Ceja in methodically creating Ceja Vineyards.
When the family chose its first president in 1999, Amelia, with nearly a decade in the wine industry and always a firebrand ready for new challenges, was the obvious choice. In the early years, being president also meant being PR and marketing director, compliance person, executive chef, grape picker, and general pick-up person.
Amelia’s mettle is tempered by a genuine fondness for people and a talent for making them comfortable. “It’s easy to get attention if you’re nice and genuine,” explains Amelia about her approach to business and life. “It’s just so much easier to be nice!”
It’s an approach that serves the family business well both with the public and internally: Ceja Vineyards was twice named “Best Boutique Winery in Napa & Sonoma” by Best of Napa and Sonoma Valleys Magazine, based on its 2008 and 2009 popular polls. “We like efficiency, but nurturing and warmth must be present with efficiency,” says Amelia. “Our team becomes part of our extended family. That comes from our culture,” explains Amelia, who was named Business Woman of the Year by the Sacramento Hispanic Chamber of Commerce in 2008, “because it’s about sharing.”
Embracing both her Mexican heritage and American home, Amelia combines the best of what she finds in food and drink, tradition and innovation. “As a minority cellar, we are shaping the wine industry,” explains Amelia, who was honored as the “most outstanding female leader, innovator and visionary in the wine field in the North Bay” by North Bay Business Journal at its 2008 Women in Business gala.
“We’re embracing the best in both cultures and tossing away what doesn’t work,” says Amelia. “I don’t want to be homogeneous; my experience is enhancing my adopted country. We’re making both of our cultures better. Why not share what is wonderful—and keep it?” Salud!
Dalia Ceja
Director of Marketing
Dalia Ceja has been surrounded by wine, food and travel her entire life. She may have grown up in the wine industry but she comes from very humble beginnings. In the late 1960’s her grandparents immigrated to the U.S. from Mexico, worked in the vineyards and settled in the Napa Valley. With her parents as her role models, hard work and education have been the forefront of Dalia’s drive to excel. 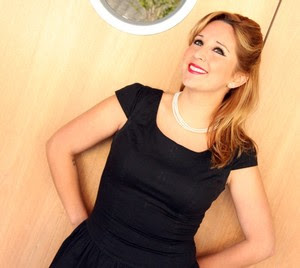 In 2008 she graduated from San Francisco State University with a B.A. in Marketing & Communications. After graduating from college she departed on a six month “Study Abroad” backpacking journey through South America, learning, exploring and enriching her career with real life experiences. This became the anchor for a blog that she would later launch in 2011.
In 2009 she brought her expertise to Ceja Vineyards as the Sales and Marketing Director. “A lot of minority wineries are developing their own style,” she says. “For us, it’s been about family and taking wine to a new level.” And for Dalia, being a Ceja means being part of that evolution, which includes promoting awareness of authentic Mexican cuisine and its subtle, complex flavors—the perfect companion for pairings that yield a new wine experience.
“Technology and social media have been a great way to expand our presence,” she says of the tweeting and blogging she does regularly. It is, however, cooking and the Ceja approach to wine and food that continue to be the biggest factor in opening doors. Dalia’s growing role in the culinary world is reflected in the expanding presence of food on the winery’s website, www.cejavineyards.com, and on YouTube, where she has published cooking demonstration videos.
Though she and her mother, Amelia Ceja, share many of the same talents and responsibilities, Dalia’s dynamic energy marks the young woman as an identifiable presence and distinctive representative of Ceja Vineyards. It was Dalia’s honor to be chosen for the role of co-host in the Napa segment of MSN.com’s “Rediscover” web series in 2010. In 2011 Dalia was named 'Woman of the Year" through the Napa Valley Hispanic Chamber of Commerce for her entrepreneurial leadership and charitable contributions. In May of 2011 she launched her own blog and website titled The Ole! Report. She highlights her own passions to creatively focus on wine, fashion, food, travel and fiestas! Visit www.theolereport.com
“You’re never too young or too old to explore your passions,” says Dalia, who is grateful to her parents for encouraging her to do just that. She plans to further her education and attend Sonoma State University to receive her M.B.A. in Wine Marketing. With her personal flare and her passion for wine, cooking and travel, Dalia is set to leave her mark! Ole!