Nestled below the Golden Gate Bridge, overlooking the San Francisco Bay lies a lodge, restaurant, bar and so much more.  The Lodge is Cavallo Point Lodge. The restaurant is Murray Circle, the bar, Farley Bar and the chefs are passionate about supporting their local farmers and purveyors.  In this episode of Slow Living Radio we welcome Executive Chef Justin Everett, and Pastry Chef, Ethan Howard to tell their stories and more about the property. Then we find out the story behind Rancho Gordo, a treasure trove of beans and other delights. 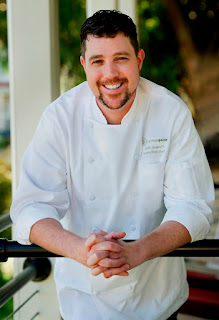 Murray Circle Executive Chef Justin Everett is a longtime resident of the Bay Area with extensive experience in California’s Wine Country. As is the case for many successful chefs, Justin’s first experience working in a kitchen was a dishwashing job in high school. From there he worked his way up in restaurants throughout college and received a Culinary Arts degree from the Western Culinary Institute in Portland, Oregon.
Upon returning to Wine Country, he spent time in some of the best kitchens on the West Coast including working as Chef de Partie at both Bouchon in Yountville and Auberge du Soleil in Rutherford. Most recently, he was Executive Chef at El Dorado Kitchen in Sonoma for four years where he cultivated relationships with local farmers and instated a regionally-inspired menu that featured approachable seasonal cuisine.
With numerous awards and recognition under his belt, including Best Chef of Napa/Sonoma for 2009 and 2010, Justin has developed a following for his handcrafted charcuterie and whole - animal cooking. He uses a signature blend of both classic and modern cooking techniques but places emphasis on sourcing the best meat, fish and produce. He describes his food as “ingredient-driven” due to his long-standing relationships with local farmers, wine makers, ranchers, fishermen and other artisan producers. His menu reflects his respect for the growing seasons, ensuring that every herb, fruit and vegetable is picked at its peak. This attention to detail results in a complex combination of flavors and textures that enliven the character of each dish.

Justin was personally selected by Murray Circle’s founding Executive Chef Joseph Humphrey as his replacement after the two worked closely together at Auberge du Soleil. He looks forward to bringing his foundation of sustainability and respect for local products to Murray Circle. He is also excited to uphold the social responsibility that he has strived to maintain by “employing, feeding and supporting” his local community. In the past he has mentored local youth in the kitchen and has partnered with Benzinger Family Winery to foster an appreciation and respect for farming the land.
Justin lives in the North Bay with his wife and three sons.
Ethan Howard
Pastry Chef 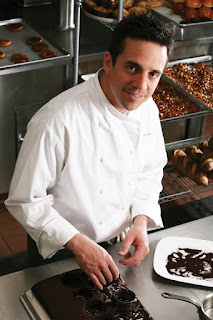 As pastry chef for Murray Circle restaurant, “whatever has sugar in it is my domain,” says Ethan Howard. Using local culinary resources challenges Ethan to create the freshest and highest quality dessert menus. Ethan most recently was with the Thomas Keller Restaurant Group, where he was pastry chef for Bouchon and Bouchon bakery in Yountville since 2005.
Prior to that, Ethan helped open Martini House restaurant in St. Helena in 2001 and defined a pastry menu that served as a finale to Chef Todd Humphries’ rustic menu. Ethan accepted that position after studying refined pastry at The French Laundry under Pastry Chef Steven Durfee and Sebastien Rouxel. Before The French Laundry, Ethan joined Chef Francois Payard at Payard Patisserie and Bistro in New York City, where he found his true passion for specializing in pastries. The satisfaction of seeing faces light up when people tasted a fresh pastry was something that Ethan wanted to encapsulate over and over again.
Ethan started his career working for Chef Hubert Keller as saucier at Fleur De Lys.
Ethan graduated from Pitzer College in Claremont, Calif., with a degree in human biology, and his love for his craft blossomed while working summers in various kitchens.
Steve Sando
Owner, Rancho Gordo
The seeds of Rancho Gordo were literally planted in a grocery store here in Napa. I was shopping one August for tomatoes and despite being in one of the world's most magnificent agricultural regions, all the tomatoes were from a hothouse in Holland! Worse, they were hard and pale pink instead of the ripe tomatoes I was craving. I started to grow my own tomatoes and this eventually led to beans. 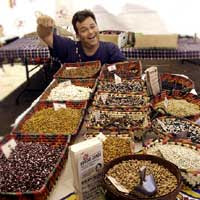 All of my agricultural pursuits have been based on being someone who likes to cook but gets frustrated by the lack of ingredients, especially those that are native to the New World. It seems to me these indigenous ingredients should be familiar, if not common but instead our own food is considered exotic and sometimes in danger of being lost as we pursue a watered down Euro-centric diet.
American cuisine seems to be in a position of re-inventing itself and I'd love to include ingredients, traditions and recipes from south of the border as part of the equation. I love the concept of The Americas. I feel as if it's just as important as the European heritage many of us share.

Of course you don't need to know where food originates in order to enjoy it. The beans are amazing and work in almost every cuisine. Their roots may be Mexican but can you imagine anything more French than the Flageolet bean? Borlotti may be the pride of the Piedmont in Italy but they wouldn't exist without their roots in Colombia 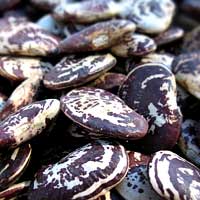 I quickly learned that I wasn't a particularly gifted farmer and in order to grow the amounts of beans I'd need to really make this work, I'd have to work with bigger growers. We now have four growers working with us, all in Northern California except one in Fresno. We import one bean from Peru and our quinoa comes from Bolivia. My goal is to support Northern California agriculture but there are some instances where the best quality means sourcing outside of my state. Sourcing quinoa and amaranth led me to a cooperative of Bolivian farmers who hand-harvest the Rancho Gordo products.

I'm lucky enough to travel throughout Mexico and Central America searching for unique and rare legumes and herbs that I'll bring back to my trial gardens here in Napa. Each summer I grow them out to see if they'd be suitable for production or just seed-saving. We're starting to develop a substantial seed bank as friends and customers are constantly sending me odd and rare beans from their travels. I share seeds via the Seeds Savers Exchange and I'd encourage anyone to give growing beans a go. It's easy, fun and the rewards are almost immediate.
Posted by Slow Living Radio at 12:00 AM